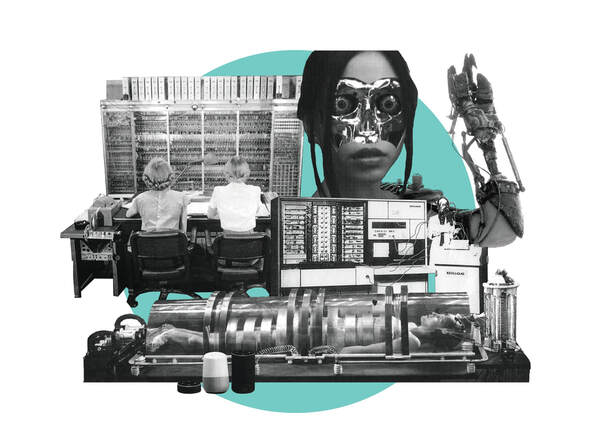 Project Abstract:
Gendered Machines: any non-human, mechanical objects that are associated with, signifiers of, or explicitly assigned a gender. Through my project, concerned with understanding how this phenomenon manifests in both lived and fictional realities, a typical polarization is revealed in these relationships. Labeling that reflects limiting understandings of gender identity is imposed onto the objects that people create, use, and identify with, where things are generally understood to be either objects of service or of domination. This is a patriarchal oversimplification that my work seeks to complicate.
Guiding this project is an intent to understand the effect that tropes within pop-culture representation actively have on our shifting relationships to mechanical objects—from common utilitarian tools to instruments of monumental power. Through this research, I probe intersections between humans and machines as a means of identifying how such constructed affiliations originate and perpetuate. This project analyzes the treatment of iconic robots within significant works of Science Fiction film through lenses informed by gender and film theory, with attention to the ways these works exist within larger historical contexts. Here, I position particular pairings in alignment across a continuum of traditions as a framework for examining how they extend or disrupt themes of power and resistance that are built into the mythos of a robotic figure.
I focus this work within three scopes--Body, Voice, and Spirit—each acting as a nexus where patterns of signification are often located across works within a century of robot films. Through these, I address how common socio-spiritual relationships converge within figurations of the mechanical, both worshiped and feared for the power that they hold. As these intersect with constructions of gender expression, a particular impact is made on the ways we are encouraged to associate with machines. The imagined ideal of perpetual progress, featured throughout the Sci-Fi genre, is both a figurative and very real expression of patriarchal dominance over the world, through a mastery and wielding of science. And when fantastical figurations of the future sync the creation of humanoid technology with traditions of powerful feminized tropes, audiences are destined to wrestle with her simultaneous signification as both an idol and a demon.
The descriptor Gendered Machines also reflects the culturally constructed mechanisms by which categorization is imposed onto the ways we choose or are allowed to identify. The criteria for correctness, which dictate the production processes for the imagery and objects that culturally define us, are still nearly always generated out of patriarchal projections. Just as an ideal femininity is socially invented to serve male desires, technological artifacts, tools and media, are built to fulfill the needs of the historically male-controlled landscape of invention, a system that often figures white, wealthy, heterosexual maleness as a homogenized representation of all human experience.Generated from investigations into the design process for commonplace computerized objects, interwoven histories of influence are revealed through this project. In these, a web of representations that are produced through repeated narratives in film have aligned our understandings of both agentic object-hood and the construction of gender expectations.